The report "Soil Conditioners Market by Type (Surfactants, Gypsum, Super Absorbent Polymers, and Others), Application (Agriculture, Construction & Mining, and Others), Formulation (Liquid and Dry), Crop Type, Soil Type, and Region - Global Forecast to 2025" The global soil conditioners market is estimated to account for a value of USD 1.7 billion in 2020 and is projected to grow at a CAGR of 8.3% from 2020, to reach a value of USD 2.5 billion by 2025. Increased demand for agricultural crops such as rice, wheat, and soybean, especially from developing countries, and decrease in the availability of agricultural land owing to urbanization is among the key factors expected to drive the soil conditioners market. 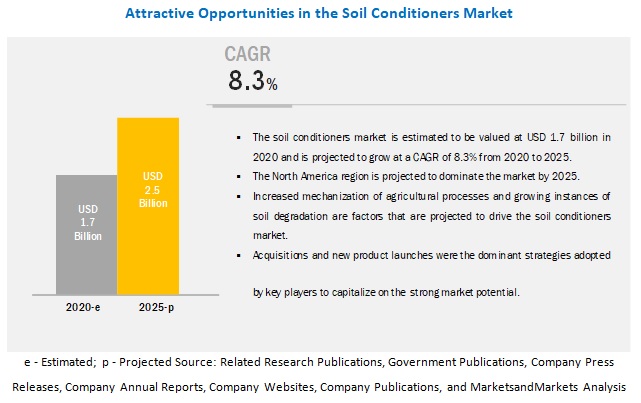 The surfactants segment is projected to be the largest segment in soil conditioners market during the forecast period.

Cereals & grains are the staple food products in many countries, which include wheat, rice, corn, sorghum, oats, and barley. With the increase in population and food demand, the basic requirement of farmers is to increase the yield of cereals & grains in a sustainable way. Here, demand for soil conditioners, such as surfactants (soil wetting agents), gypsum, and natural polysaccharide derivatives, are expected to increase to improve the quality and quantity of cereals & grain crops.

The loam soil segment is projected to be the largest segment in soil conditioners market during the forecast period.

Loam soil is mainly used for gardening and agricultural purposes, owing to its water-retention capacity. It has high calcium content and has a high aeration capacity. This soil is suitable for most crops and vegetables. Loamy soil covers major parts of the Earth’s crust and is considered highly fertile. Rotational farming is highly practiced on loamy lands, which is projected to drive the demand for agrochemicals, such as soil conditioners. Loam soil is widely available across regions, due to which this segment is projected to dominate the market.

North America accounted for the largest share during the forecast period.

The North American region accounted for the largest share during the forecast period. The increase in industrial activities is a key factor that has caused soil degradation in the North American region. Also, North America hosts several mining activities, which lead to barren soil that is susceptible to erosion by wind and rain. . In North America, contamination of the surface in farms and mining to extract minerals, coal, oil, or gas has resulted in soil degradation. According to a report published by Cornell study 2017, in the US, soil disappears ten times faster than it is naturally replenished at an estimated rate of nearly 1.7 billion tons of farmland per year. These factors have contributed to rise in demand for soil conditioners in the region.