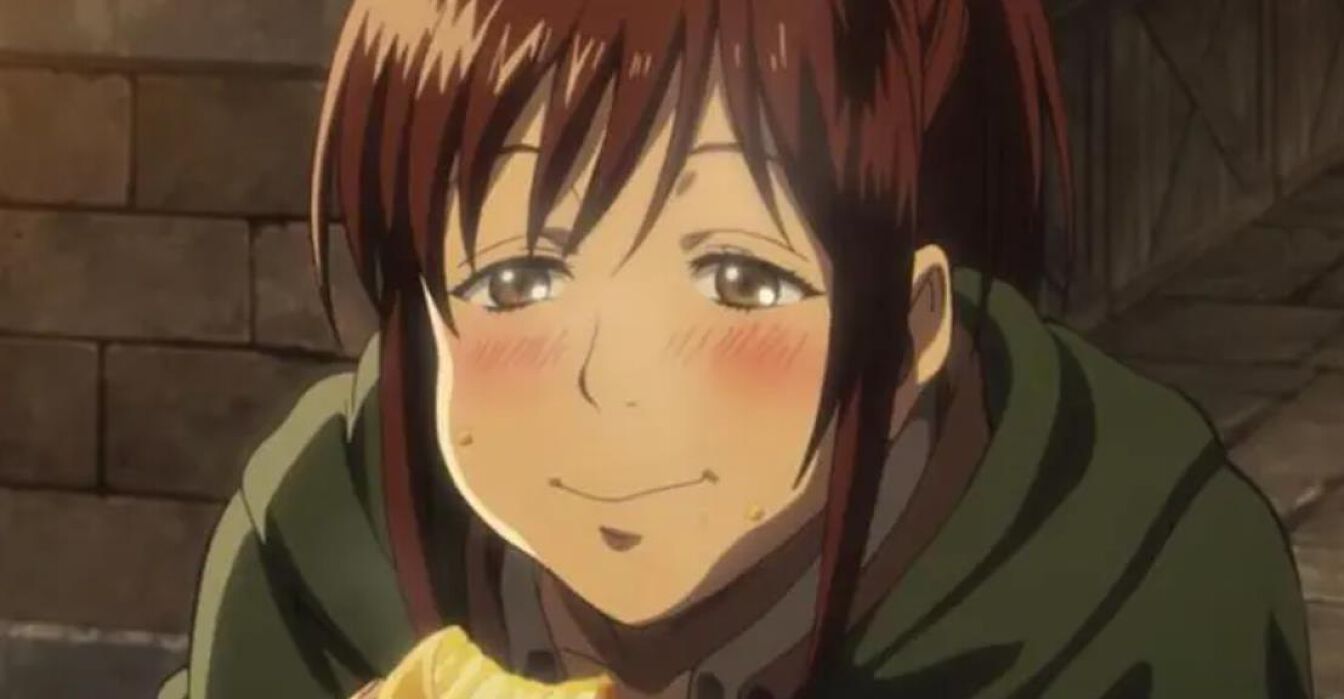 Every year in several new anime releases, there must be characters who like to eat. Some of them show this clearly, sometimes confusing "How can you eat so much?"

Food is a universal need for every living thing on this planet. What counts as food depends on the species, but of course for humans it can be anything. As omnivores, humans can eat a lot of substances, which means there's plenty of food out there that can make people and anime characters drool!

Meanwhile, many of the anime characters who like to eat and are greedy are found in male characters and rarely exist in female characters. For example Monkey D. Luffy from One Piece and Goku from Dragon Ball. Both of these men have great appetites. But female characters like Sasha Braus from Attack on Titan are here to give them some competition.

1. Sasha Braus, the greedy one!

One of the first things Attack on Titan fans will know about Sasha Braus is her addiction to the sometimes dangerous food. In the slightest he can not live without food! Just eat, eat, and eat. Wow, you're not afraid of getting fat, are you?

Although it may be due to her background as a hunter from Dauper Village, Sasha also seems to get a lot of stress relief from eating. His desire for food is so strong that he is always looking for ways to get food, one of which is stealing in the warehouse, making friends and even a kitchen commando when he was a trainee, which led to him being punished for the theft. Crazy, really desperate huh?

2. Kagura, no less greedy than Sasha!

On the second list is Kagura from the Gintama anime. Rice and sukonbu (seaweed) seem to be Kagura's favorite food, but she seems to be eating more than that! Seen in Gintama he is an eater of all kinds of food. Great, the stomach is not full!

As a member of the Yato tribe, Kagura has an insatiable appetite that allows her to eat large amounts of food without any problems. Several episodes of Gintama have Kagura eat several times her normal size, and she is even seen eating a giant takoyaki ball.

Luckily, he's energetic enough to burn off all those extra calories quickly. Wow, if you're going out with him, your food might also be devoured! Ha ha ha

Next up is Fuu Kasumi from the anime Samurai Champloo. Why can he be said to be greedy? Well here's the story!

Just before handing over their swords as entry fees for the eating contest, Fuu Kasumi noted that she, Mugen, and Jin were greedy people, so winning the eating competition should be easy.

However, only Fuu was able to survive until the last round of the eating contest. Just imagine, he could finish 27 bowls of anago-don! How strong is his stomach? But sadly, he unintentionally signaled his defeat.

Anago-don is a Japanese dish consisting of grilled eel on top of rice, and it tastes pretty good, so it's no wonder Fuu can keep eating it. Do we really want food like that too? But are we strong enough to beat Fuu? I don't think so!

4. Hinata, the queen of Ichiraku Ramen!

Switch to one of the best shonen anime, Naruto and its franchise, Boruto. Who would have thought that Hinata Hyuga, who was shy, cute and quiet in his childhood, could be on the list of one of the hottest women in anime? Aren't you surprised?

Happens in the Boruto anime timeline. After marrying Naruto, Hinata became a good wife and dear to the family. He also becomes fierce when people in the house are noisy or noisy! Well, there is a story when Boruto and Naruto were traveling around Konoha, then stopped by to eat at Naruto's favorite ramen when he was a child until now, Ichiraku Ramen.

Using a lifetime free coupon from a wedding gift, Boruto and Naruto eat normal sized ramen. Come Choji and Chou Chou to Ichiraku. They battle a lot of ramen. But what can they do, they still can't fight the queen of greed in Ichiraku.

Boruto wonders, who is the queen of gluttony? Naruto was embarrassed and pointed at the poster. Boruto was shocked beyond measure, who would have thought that the legendary queen was his mother, Hinata. A total of 46 bowls is a record that Choji and Chou Chou have not been able to break at once. Isn't that great Hinata? Looks like he's tired of taking care of Naruto and his kids, so he can eat a lot like that!

Some Female Anime Characters Who Really Love to Eat

5. Valac Clara, the master of snacking

Next up is Valac Clara from the comedy anime Mairimashita Iruma-kun!. One of this trio of Asmodeus and Iruma is the most unstoppable! If you ask the reason, it's because of the race of descendants! His family just can't stay silent, starting from his mother as well as his younger siblings. The advantage of this Clara is that she can remove anything from her pocket, from food and others. Just like Doraemon.

In addition to his strength, he is a character who loves to snack and eat! In the trio, Clara and Iruma are the ones who love to eat the most, and Clara can really eat anything. It can be seen that when Asmodeus and Iruma went to Clara's house, they made a lot of food! Almost everything is finished with Clara. Is it really cool to help a friend finish the food? Ha ha ha

Well, those are some female anime characters who really like to eat. How? You want to eat right? Don't forget to follow the KINCIR website to keep up with developments around movies, anime, and games.