Under oath, Larry Page disputes that Android is a $43 billion business for Google 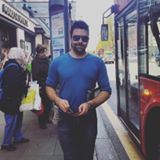 Oracle is suing Google for billions of dollars and on Thursday Larry Page, the CEO of Google parent company Alphabet, was called to the stand by Oracle's lawyers to testify.Oracle's lawyers asked him about the revenue that Google generates from its Android software, which is something Google doesn't publicly discuss.Oracle's expert witness had previously testified that Google has generated $42.3 billion from Android, mostly through advertising.The lawyer showed Page a document presented to Google's board of directors about Android saying, "Our application and advertising services helped build Android into $43B / year ecosystem," according to the live coverage of the trial relayed on Twitter by several reporters and observers at court on Thursday.But Page balked at that document.

"I don't think those revenues are Google's revenues," he told the court, according to tweets from Sarah Jeong, who is covering the trial for Motherboard.Page said he thought the number referred to how much the entire ecosystem has made on Android, including carriers and others, not just Google.Oracle is suing Google for billions of dollars, alleging that Google owes it a lot of money in royalties and damages for copying certain bits of software from a programming language called Java to when Google created Android.Oracle now owns Java, acquired when it bought the company that created it in 2010, Sun Microsystems.

At issue are bits of computer code called application programming interfaces or APIs.

Page didn't play into Oracle's handsPage also got in a bunch of other jabs on the stand:When asked why Google acquired the company that had initially created Android, Page took a shot at Java, the programming language owned by Oracle at the heart of this trial.

"I was frustrated with the state of phones at the time… many of which were running Java," he replied, according to tweets from EFF activist Parker Higgins.In a line of questioning about how if he knew that Google did not license these APIs from Sun yes, he did know that , Page also pushed back, "I don't agree we copied code," reports Motherboard's Jeong.Page said he thought it was industry practice to take API headers and re implement them.

Google is now arguing that its use of these APIs fall within fair use.