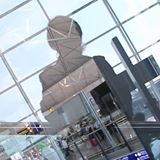 This is Eddy Cue.Eddy Cue is the senior vice president of internet software and sales at Apple.He also likes basketball.

The Warriors won 96-88, with Stephen Curry helping the team pull of what is being referred to as "one of the NBA's great comebacks."

Eddy Cue was there, and even made the front page of The San Francisco Chronicle.Lisa Jackson, Apple's vice president of environment, policy, and social initiatives, is also a fan.