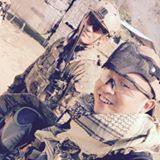 be rocking out to in his last summer in office.The lists encompassed a wide variety of music, from

rap to jazz to Manu Chao, though one track conspicuously absent

was Eminem's "Lose Yourself," which Obama used to hype himself upbefore his DNC speech this year.Not to be outdone, Vice President Biden has released his

judge:  The Bidens Summer PlaylistStay With Me — Sam Smith

We Take Care of Our Own — Bruce Springsteen

Glenn Vedder
Related Articles
WHO TO FOLLOW
MORE FROM AUTHOR