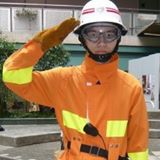 Emmerich is the chairman and co-founder of a new VR media outfit named VRenetic that aims to make 360 degree broadcasting accessible and affordable to everyone.

The company has its own free app, VResh, that allows for real-time streaming of panoramic video with the use of a proprietary smartphone-connected camera.

It’s powered by the company’s own Media Engine, which it plans to utilize in other apps developed both in-house and with partners.

Here’s a idyllic promotional spot set in an alternate universe where people who put a VR headset on during a bus ride to catch up with their friends on a beach.

The company claims is broadcasting is usable with average data connections, which could be key to its success if true.

John Murphy
Related Articles
WHO TO FOLLOW
MORE FROM AUTHOR