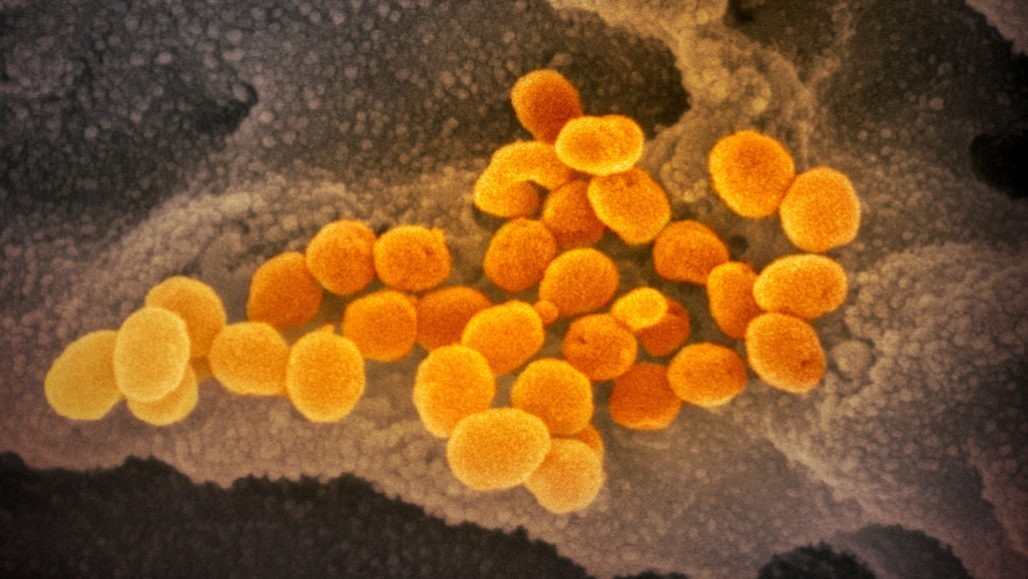 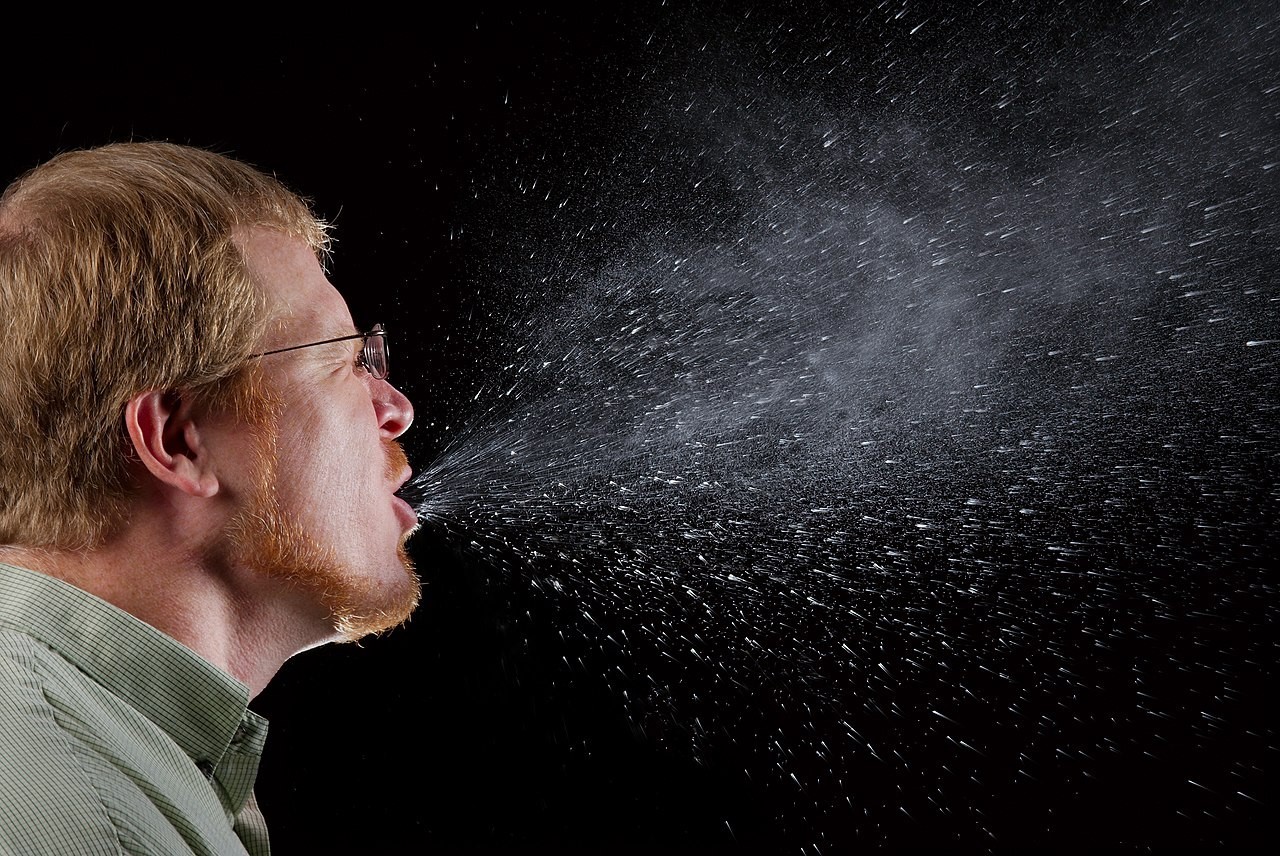 SARS-CoV-2 entry, the audience needs to first understand the mechanism of action (MOA) of the different types of antivirals. The classic definition of an antiviral is a drug that interferes with the replication process of the virus once it has entered the host cell. All antiviral drugs like Paxlovid, Molnupiravir, Remdesivir, Bemnifosbuvir, Bequinar, Tollovir, and Tempol ultimately interfere with the replication process inside the cell at least via one mechanism. The other school of thought is to keep the virus outside the cell and prevent it from entering. This subset of antiviral drugs is called an entry inhibitor.

All viruses need help getting inside a host cell and what viruses can do is actually trick the cell into opening up the door to let them in. The primary entry receptor in SARS-CoV-2 is the ACE2 receptor along with TMPRSS as an essential primer. The idea behind entry inhibitors is to block the cellular receptors making docking with the cell impossible. 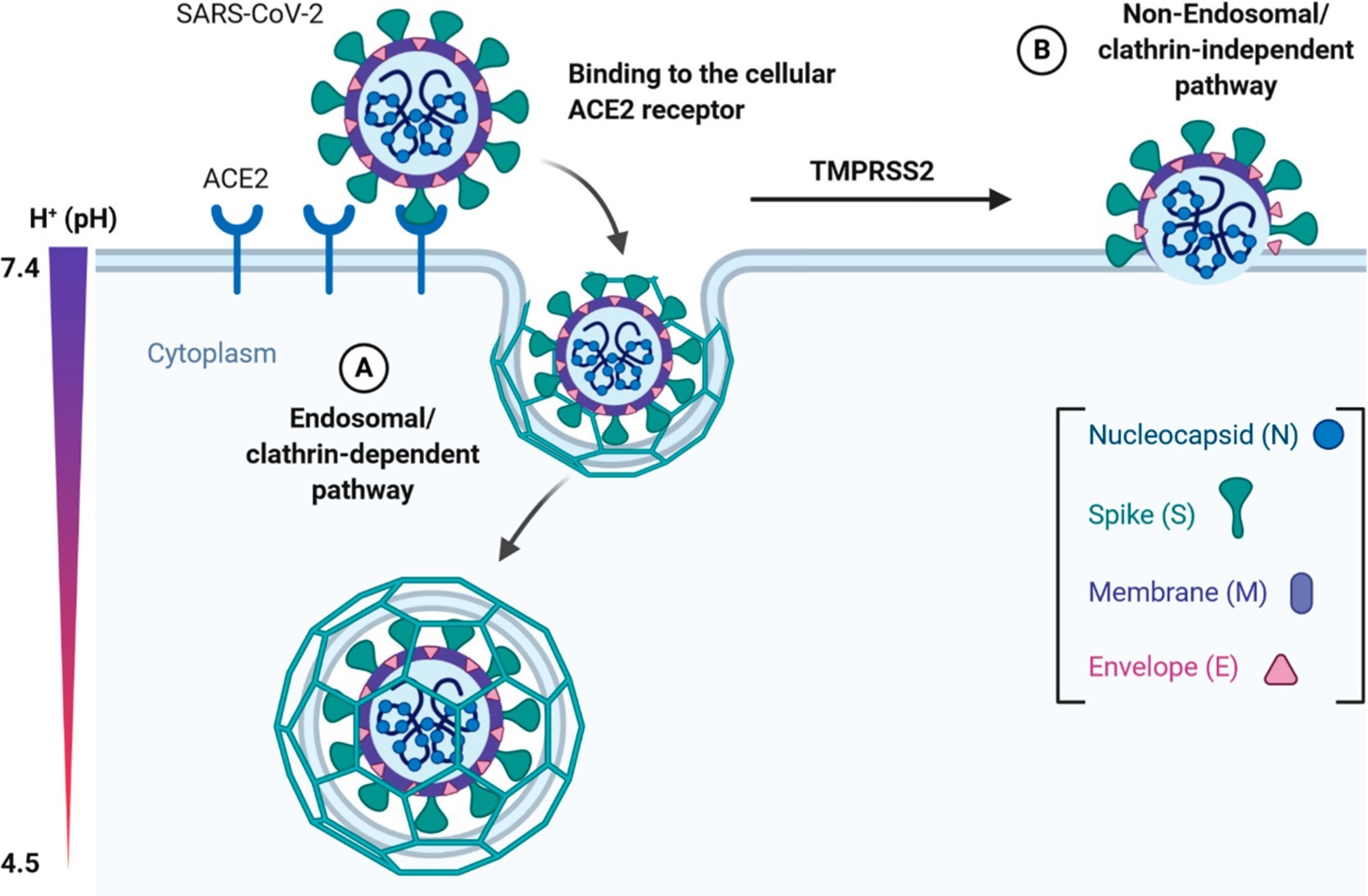 Another way to stop cellular entry is to simply bind with the spike protein. This is actually the primary function of neutralizing antibodies. Antibody formation is the immune system’s typical response to viral or bacterial infection that prevents cellular entry. Monoclonal antibodies from Regeneron, Eli Lilly, AstraZeneca, and GSK/Vir Biotechnology were developed to attach to the tip of the spike protein. Not only did these monoclonal antibodies prevent the virus from entering the cell, but it also marked the viral particle for destruction by the immune systems phagocytes.

Monoclonal antibodies are not only expensive to produce, but also very vulnerable to viral mutations leading to immune escape whereby the antibody might be able to attach to the virus but it cannot neutralize it and prevent cellular entry. With the advent of the latest BA.5 variant, the utility of the vaccines to neutralize infection is over based on a recent NEJM article. Vaccinated, unvaccinated, and people with immunity from prior infection are all vulnerable to the latest BA.5 variant which is now comprising 65% of infections in the United States. 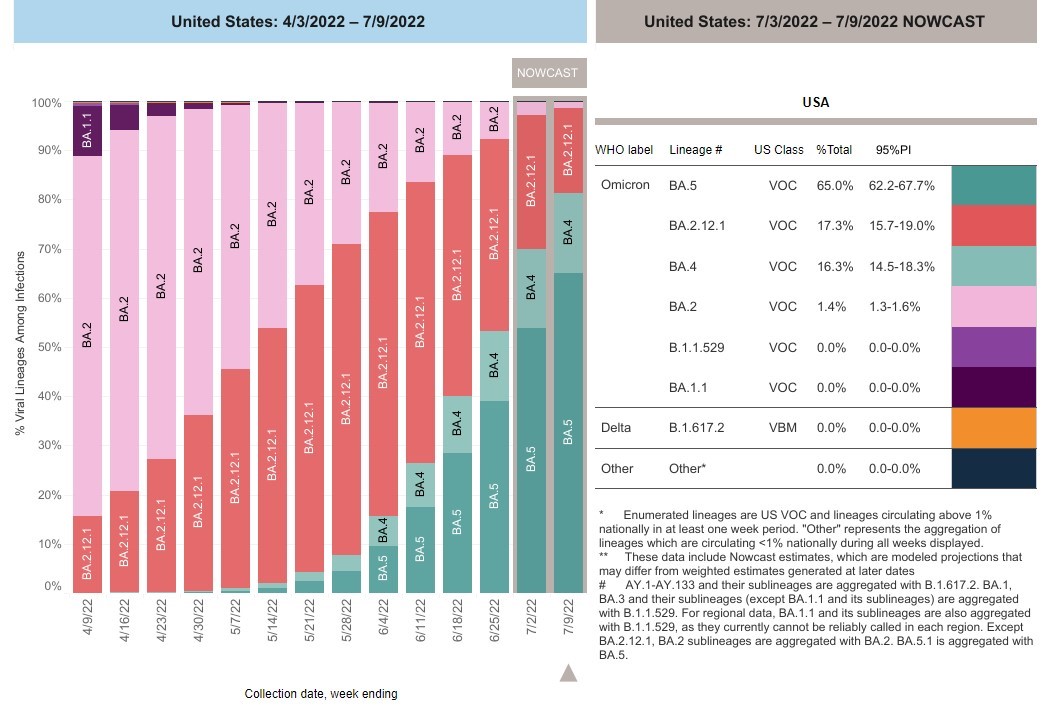 ProLectin-M (PL-M) mimics the functionality of an antibody, but behaves in a very different manner. It clearly interferes with the cellular entry as this peer reviewed journal concluded. The prevailing theory is that the molecule binds in some fashion to a conserved region on the spike protein commonly referred to as the galectin fold which is a concave region located on the side of the spike protein that mimics the carbohydrate recognition domain (CRD) of a galectin, particularly galectin-3. Additional tests would be needed to elucidate the MOA with respect to where and how it binds, but this journal article demonstrates that glycans which are a crucial part of viral entry could be disrupted with a galectin antagonist. 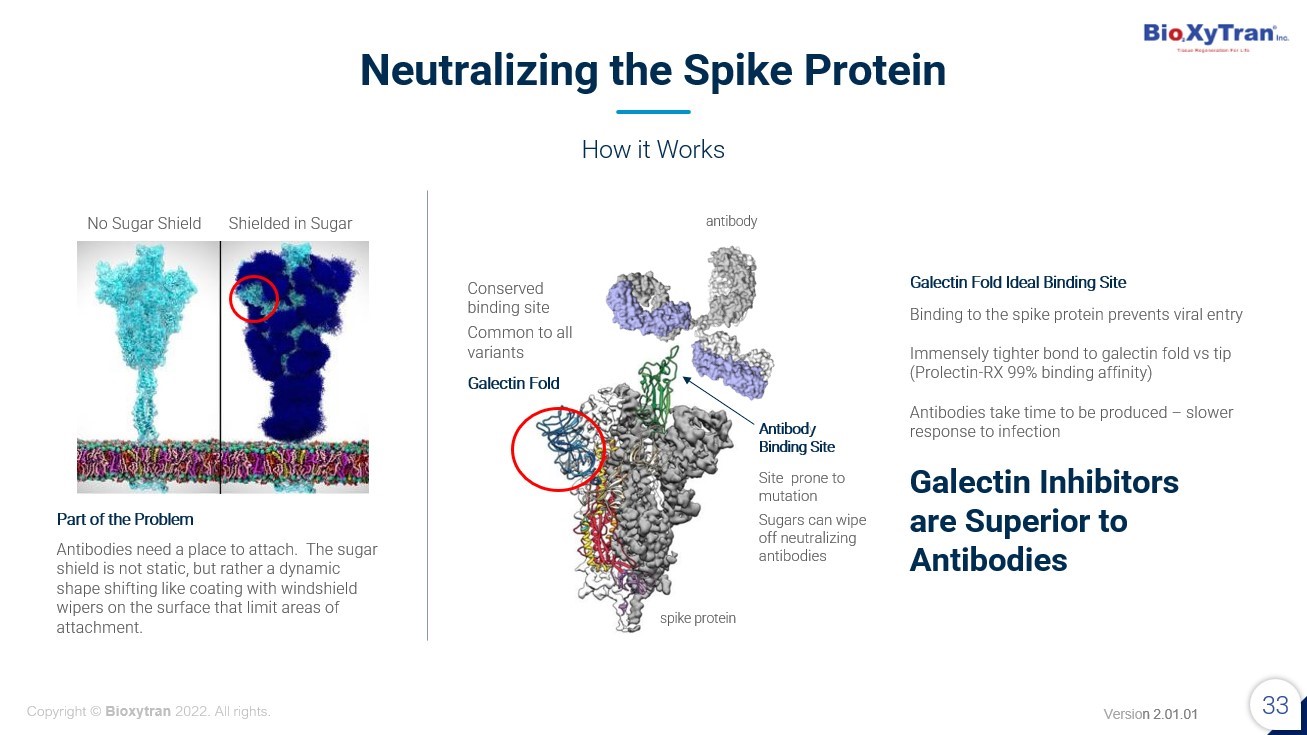 In general, when attempting to elucidate the MOA of a drug, most atomic-level tests conducted are proximity tests that simply tell if the molecules are close. For example, in most cases, the tests would measure the change in color when two molecules get close. Its a proximity indicator to help elucidate the MOA via figuring out what molecules bind to each other, but its not really to the level of proof of a smoking gun. The significance of using Nuclear Magnetic Resonance (NMR) spectroscopy is that this methodology, actually pioneered by Dr. David Platt, answers the question of where a molecule binds and how tightly it binds. The conclusion that Prolectin-M binds strongly to Galectin-3 at a micro molar level is supported by NMR spectroscopy should not be taken lightly.

The graphic that shows the shifts is difficult to understand for those not versed in the science. There are blue and red contour lines. The blue peaks contour lines represent Galectin-3 and the red peak contour lines represent PL-M. Ideal binding isn’t represented by alignment of the peaks but rather by a combination of changes in contour density and a longitudinal shift in the peaks. These contours tell where the binds are happening and shifts indicate the strength of the binding, but it is more complicated and must be analyed in conjunction with the chemical shift map. The overall conclusion is that “PL-M binds specifically to Gal-3 in the micromolar range” leaving little doubt that PL-M is an oral Galectin-3 inhibitor. 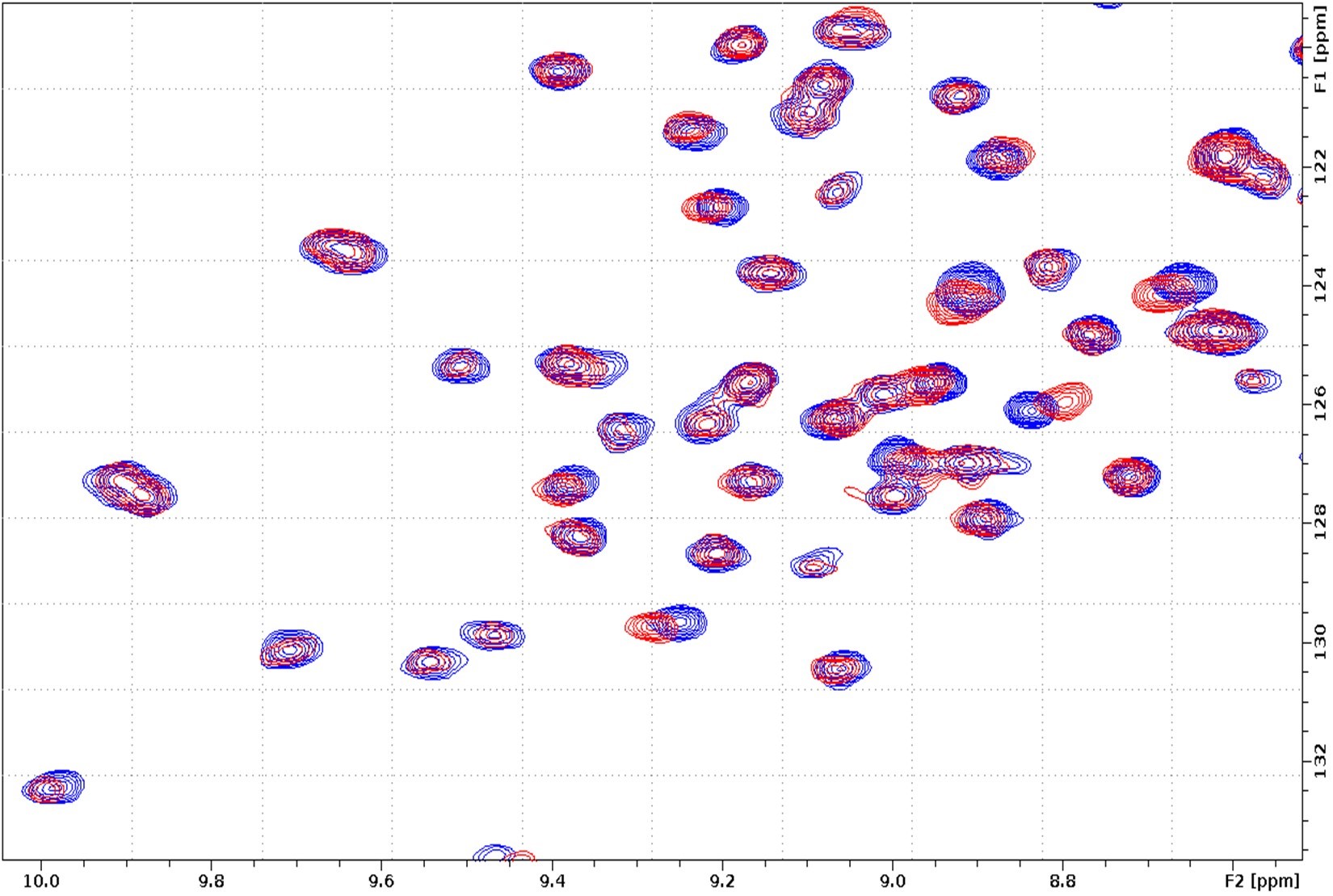 Another highlight of the journal article is a toxicity study that revealed there were no-toxic side effects in the vero cells when PL-M was administered. An interesting anecdote is that PL-M actually increased the cell viability. This is not a surprise given PL-M’s use in clinical trials showed no safety signals and that other galectin inhibitors have shown positive effects for the host cells in inflammatory diseases. 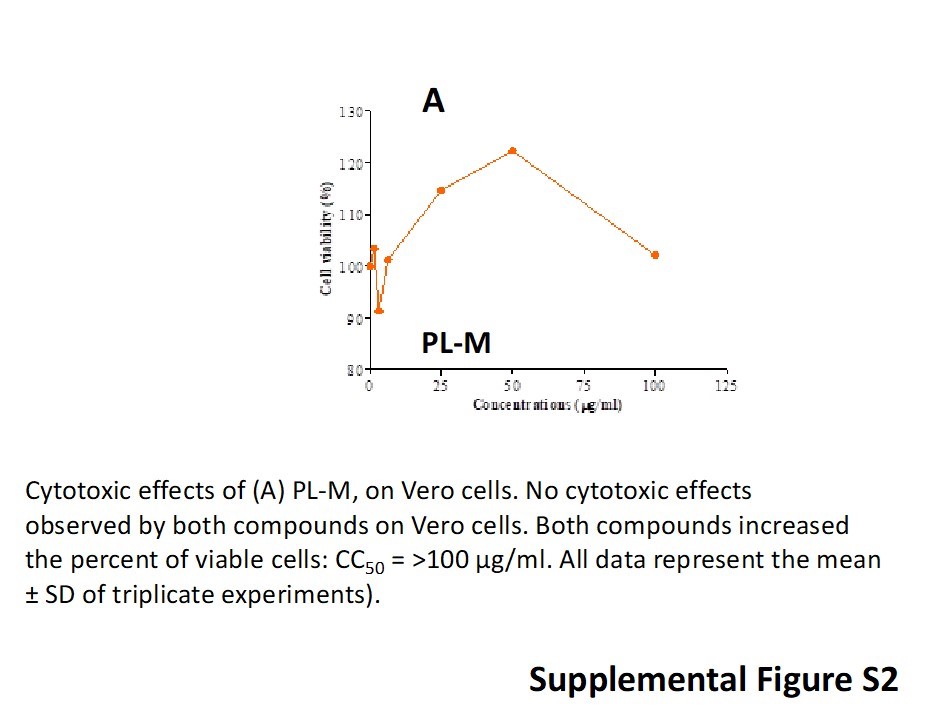 The next highlight were tests using two different protocols that showed that PL-M was able to effect a 99% or 2 Log viral load reduction in viral RNA copies. One protocol (Protocol 1) let the virus multiply in the cell culture before adding PL-M, measuring viral reduction (red line going up is good); the other protocol (Protocol 2) added the virus to the cell culture with PL-M and measured viral presence (red line going down is good). The molecule also showed increasing concentrations of the drug correlated to increasing levels of viral reduction. The viral mutations have seemed to evolve with increasing viral loads which translates to increasing infectivity. Given the toxicity profile (or lack thereof), greater amounts of PL-M could be employed to combat any future increase in infectivity of the virus. 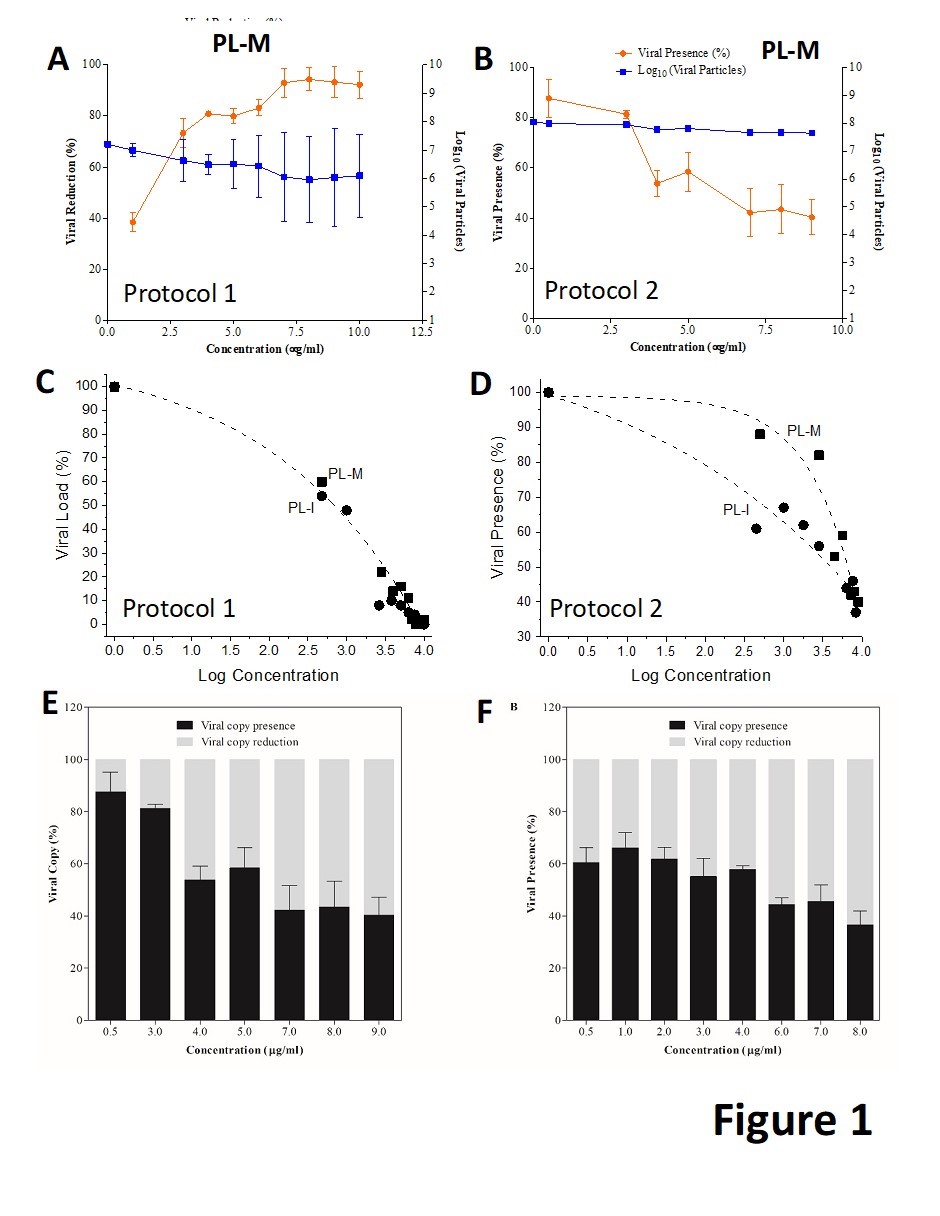 What is so significant about this journal article is that this is the first time in the new emerging field of Glyco-virology science that an optimized complex carbohydrate chemical structure was used to block the viral entry to cells. In essence, PL-M was able to achieve blockage of the SARS-CoV-2 coronavirus by interfering with the viral entry mechanism into host cells. This research by itself is groundbreaking, but when looking at the big picture all this journal article did is elucidate findings in the preliminary clinical data results from BioXyTran’s first peer-reviewed journal article using PL-M, whereby these human clinical trial results showed elimination of viral load to undetectable levels within a few days (p<0.029). The power of galectin inhibition on viruses is unmistakable.

Clinical research is currently in development, but it is worth reiterating that PL-M was able to achieve undetectable viral load in a few days. It’s hard to ignore the comparison to Paxlovid which required 20 days to get 30% of the patient population to undetectable levels. The R-naught (R0) index is a measure of contagion whereby anything under 1.0 will eventually fizzle out and anything over 1.0 represents the number of infections that would be spread by one person. Given R0 of BA.5 is currently sitting a 18.6 and similar to measles it might be time for a shift in policy that starts looking at ways to control contagion instead of hospitalization. For comparison purposes the original Wuhan strain had an R-naught of 3.3. At the crux of the debate, the issue can be distilled down to which is better; eliminating contagion in 3 days or eliminating 30% of contagion in 20 days using Paxlovid, the most effective drug in the COVID-19 arsenal.

This journal article represents a major breakthrough in the potential treatment of COVID-19 using a novel antiviral MOA. There is clear evidence that PL-M could be classified an an entry inhibitor which is a subset of antiviral. Drugs capable of binding to a conserved region of the spike protein should be able to block entry of any new variant. Reducing infectivity of the virus using a non-toxic drug may have great value in turning the pandemic into an endemic disease.

Prolectin-M is an orally administered experimental new drug candidate that targets the Carbohydrate Binding Domain portion on the SARS-CoV-2. As promising as the theory is discussed in the journal article, readers should be aware that ProLectin-M is not currently approved to prevent, treat, or cure any disease.

Arik writer
Related Articles
WHO TO FOLLOW
MORE FROM AUTHOR