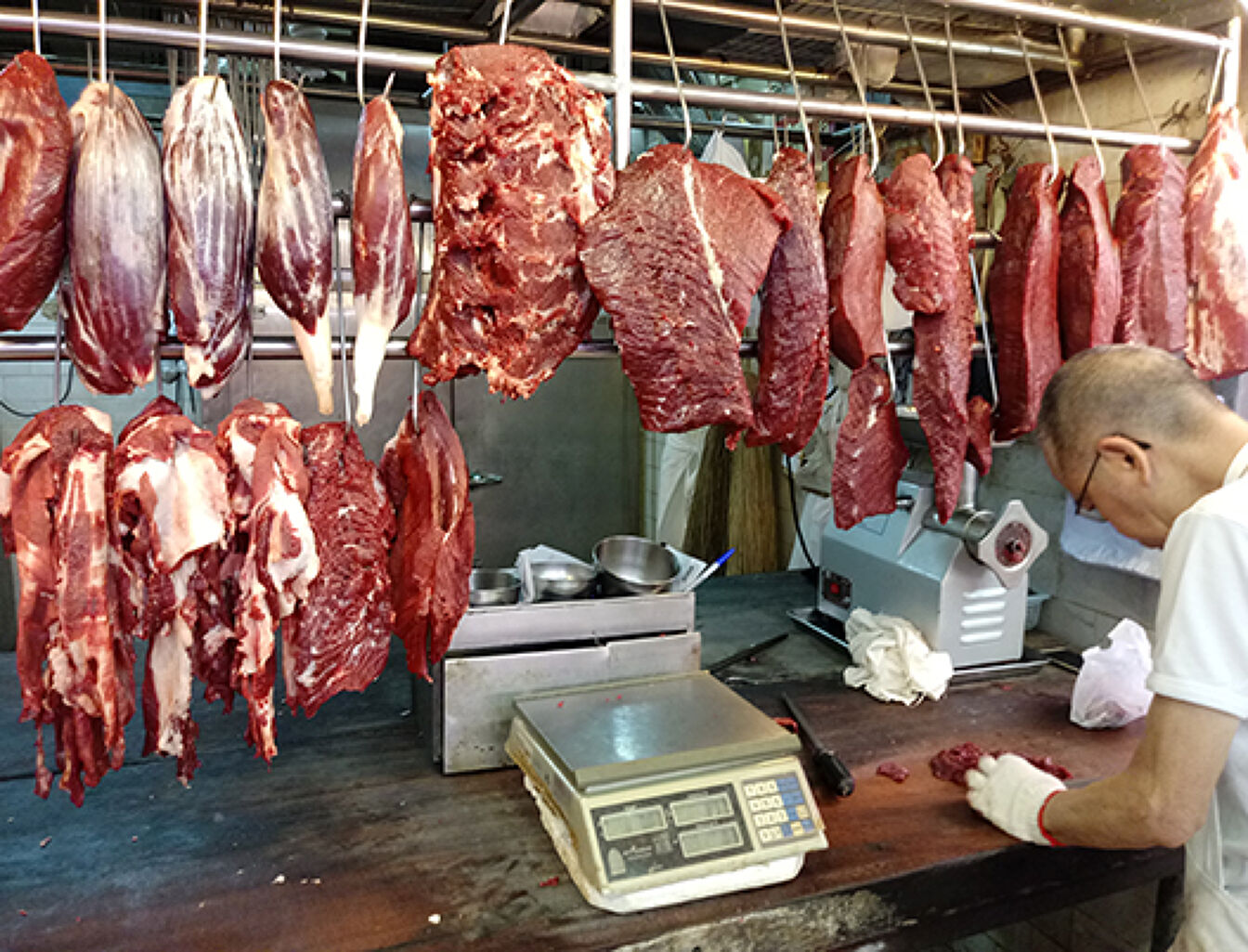 Cellular agriculture based on concepts such as biotechnology and tissue engineering is a disruptive technology in the modern agricultural era. A product of this technology is ‘cultured meat’ also branded by various names such as in vitro meat, synthetic beat, clean meat, lab-grown meat and cell-based meat. As the plant based meat products only appeal to a tiny fraction of vegetarian population, lab meats by replicating taste and texture of animal meat have a broader range of non-vegetarian audience. This trend of cultured meat, i.e. producing animal meat via tissue engineering without using or slaughtering animal is gaining profound traction. The prime factors responsible for this progression are its enhanced economic, health, animal welfare and ecological efficiencies over traditional meat. Among several factors, hazardous ecological impacts of animal husbandry is adding substantial impetus in developing cultured meat market demand. United Nations Environment has labelled animal agriculture as a close rival of every car, truck, bus, ship, airplane, and rocket ship combined, in terms of greenhouse gas footprint. Right from arable lands, to fresh water and crops (used an animal feed), animal livestock is a heavy consumer of all these limited resources. According to the Food and Agriculture Organization of the United Nations (FAO), almost 50% of worldwide harvest is required to feed the livestock population and direct human consumption is just 37%. Similarly, 70% of agricultural land globally is allocated towards livestock farming and tracing the deteriorating condition ahead it is stated that animal agriculture is responsible for 91% of Amazon destruction. Considering the global population that is determined to surpass 9 billion by 2050, demand for meat products is bound to escalate. As a consequence, there is a dire need globally for alternative meat products with lesser impacts to the environment. Since cultured meat prepared at laboratories compared to conventional meat require 99% lesser land, 90% less water and 45% less energy, it is the most pivotal asylum sought to counter global food security and ramifications of livestock farming. The global cultured meat market size was evaluated to be $13.78 million in 2018. As the market is untapped with profound opportunities there is considerable influx of investments into market companies that has led the cultured meat market demand to be progressing at a global CAGR of 4.28% during the forecast period of 2019-2025. The report covers Cultured meat market size by type and by applications, Cultured meat market share by top 5 companies and also the market share by start-ups during the forecast period

Since the economic as well as ecological cost of cultured meat will be lesser than traditional meat, the global market has been witnessing an influx of investments to pace up the R&D processes for scalable production and commercialization. The list of investors in this untapped market includes eminent personalities such as Bill Gates and giant companies of the global F&B sector including Cargill Corporation and Tyson Foods, Inc. For example in 2017, Memphis Meats, a dominant market player based in the United States secured funding worth $17 million. Apart from Bill Gates, the list of investors in the company was comprised of various venture capital firms including Draper Fisher Jurvetson and New Crop Capital. Similarly in 2019, Cargill Corporation declared its investment in Aleph Farms, a cultured meat company focused on growing complex meat varieties like steak. This Israel based startup accomplished a financing round of $11.65 million in 2019, with investors including Vis Vires New Protein and M-Industry (Industrial Group of Migros). At present investments are the major cultured meat market growth driver and recognition of food products using animal cell culture technology by elite organizations such as The Food and Drug Administration is adding further incentive to the growth. In 2018, FDA held a public meeting on Foods Produced Using Animal Cell Culture Technology. Although the agency to regulate cultured meat is yet to be confirmed, direct involvement of FDA with the market is lucrative in terms of advertising and marketing of cultured meat products globally.

Out of 18 globally, the United States published 8 patents in global cultured meat market during the last 5 years:

After an acute analysis of the regional cultured meat markets globally, North America is reckoned to be most lucrative market place. The region with 2 of the global leaders in meat consumption, the United States and Canada held 30% of the global demand in 2018. According to the World Economic Forum, United States is the leading meat consumer globally. The country in 2016 recorded per capita consumption of 97.1 kilograms, whereas the only other North American country in the list was Canada securing the 8th spot with 70.0 kilograms per capita consumption. Apart from the established meat market that eventually stands out as a potential market for cultured meat products another factor adding advantage to North America is the presence of the majority of cultured meat connoisseurs in this region. The fact that out of 18 patents published globally during 2014-2019, 8 were published by the U.S very well supports the above argument. Majority of the cultured meat market players in the U.S have announced to commercialize their products in the market by the end of 2019, and FDA and U.S Department of Agriculture are also set to finalize rules for inspection and labelling by the similar timeline. The governmental institutions have been throughout involved in the R&D and that has been a major factor in listing and advertising lab meat to nationwide audience. For example in 2017, the White House, U.S requested a report on “Preparing for Future Products of Biotechnology” by the National Academy of Sciences. The report flagged clean meat market as a zone of high growth potential in the coming 10 years.

Burger King ready to add lab meat into its menu:

Since the R&D is at a nascent stage, substantial portion of early products of the cultured meat market are unstructured meat such as ground beef and insides of chicken nuggets. These unstructured cultured meat products finds ample scope of application in the flourishing fast food industry of North America. As some of the fast good giants such as Burger King has already accepted application of alternative meat products, their uptake of cultured meat products cannot be denied. According to the Centers for Disease Control and Prevention, by 2016 one of three Americans (36%) consumed a meal at fast-food eateries on any given day. And as the United States annual consumption of burger is stated to be around 50 billion units, even a fraction of that traffic diverting towards the $13. 7 million cultured meat market will be a remarkable business for market players. According to a recent survey by Science Institute, 49% of US adults recommend a ban on factory farming, 47% on slaughterhouses, and 33% support a ban on animal farming. Hence, nearly half of the population in the U.S stands out as potential customers for cultured meat.

The global population by 2050 is estimated to reach 9.6 billion by 2050 that will increase the demand for livestock produce by 70%. The existing animal husbandry sector is enormously detrimental and among the leading causes of water pollution, deforestation and loss of biodiversity. Hence an enhancement of 70% will deteriorate the situation further, hence an ample amount of the increased demand is bound to be met by the cultured meat market. A list of global circumstances creating cultured meat market demand:

Globally, lifestyle of 700 million people in 43 countries are impacted by water scarcity. 92% of global fresh water are employed for farming and 33% of it are employed in the production of animal products. Hence lab grown meat products can be an effective solution to counter global water crisis, since cellular agriculture requires negligible amount of natural resources. Alone in the United States, more than half the water are used to cultivate crops to feed livestock and the annual animal agriculture water consumption ranges from 34-76 trillion gallons annually.

Cultured meat to reduce the area occupied by agriculture:

Apart from the global food security, another major concern for the bourgeoning global population is habitat. In 1950, 30% of the global population were living in urban conditions whereas by 2050 66% population are expected to live in urban areas. Consequently, shrinking cities is a major modern era problem and one solution for it can be the release of land occupied by livestock and its employment in urban dwelling. Livestock uses 45% of the total land on earth and with alternatives for meat and dairy, global farmland use can be reduced by 75%. Hence cellular agriculture is a mega factor towards eradicating the extensive usage of land by the global agriculture sector.

Poultry stands out as the fastest growing segment in global cultured meat market:

According to National Chicken Council, per capita consumption of poultry in the United States has escalated from 34.2 pounds in 1960 to 110.0 pounds in 2018. The poultry segment constituting broilers, chicken and turkey escalated with the highest growth among the total red meat and commercial fish & shell-fish consumption evaluated during the similar timeline. Similarly in 2017, the U.S meat industry processed 9 billion chicken which was the highest followed by 241.7 million turkey holding the second spot. And, in Canada commercial chicken and turkey meat equaled to 1.43 billion kilograms. The dominance of poultry in the meat industry of the leading cultured meat market is a pivotal factor aiding the growth of this segment progressing at a CAGR of 4.89% going through up to 2025. As the R&D in the cellular agriculture is at a nascent stage, production of enlarged bovine meat products is not possible. The first stage of commercialized cultured meat is witnessing production of meat products in unstructured forms, mostly parts of chicken. And since chicken meat has witnessed tremendous increment in terms of per capita consumption globally, it is supporting the growth of poultry segment in cultured meat market.

Out of the 18 patents published globally in the spectrum of cultured meat during 2014-2019, 1 was published by Mosa Meat, a Dutch food technology company in 2018. This developing company has received funding from eminent Merck Ventures B.V, and is leveraging the established meat products market of Europe. As majority of the cultured meat market players are situated in North America, this company can create a monopoly of its own in the European market.

Talk to one of our sales representative about the full report by providing your details in the link below:
https://www.industryarc.com/support.php?id=504454

IndustryARC primarily focuses on Cutting Edge Technologies and Newer Applications market research. Our Custom Research Services are designed to provide insights on the constant flux in the global supply-demand gap of markets. Our strong team of analysts enables us to meet the client research needs at a rapid speed, with a variety of options for your business. Any other custom requirements can be discussed with our team, drop an e-mail to [email protected] to discuss more about our consulting services.

Ankitha Bommidi
Related Articles
WHO TO FOLLOW
MORE FROM AUTHOR